2nd day at SAKLAKWEL and we hit the ground running

Posted by robertnegron on February 2, 2014
Posted in: Uncategorized. Leave a comment 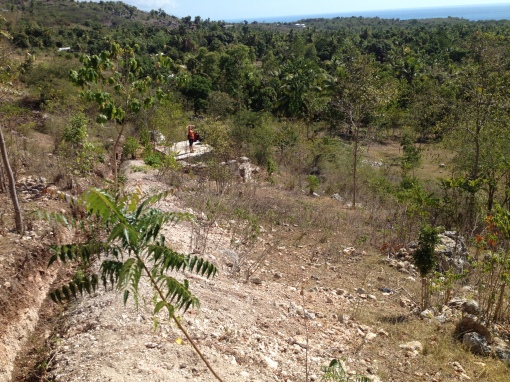 Thanks to a bit of drought much of the vegetation on the new land has been taken care of for us and the rest was cleared by a lot of hard work prior to my arrival.  Thankfully the larger trees have been left to flourish and we will do our best to build around them.
Tomorrow we will measure the land and decide on placement of the amphitheater, excavation will begin immediately after.

Thanks to holiday donations and an ongoing recycling drive at the Shaolin American Self Academy in North Hollywood we have already procured tools and 150 tires to begin the foundation.  Two hardware stores in Jacmel are excited by Earthship building techniques and have agreed to sponsor part of the build.  This means we may be able to complete the re-bar and cement roofs as soon as this March.

Unfortunately due to a small miss-communication with the owner we will no longer be able to stay at the current SAKLAKWEL while we build.  He has asked that we vacate the premises by February 10th to accommodate his new tenants.  A set back to say the least, but Tèt Kolè (the Oban Community board) quickly came to our aid and offered a new beachside location to continue Karate until the new amphitheater is complete.  We are unsure of living situations so far, but it looks as though we will all be living with different members of the community from Tèt Kolè.  It’s been a bit of a scramble, but in truth it will only force us to move faster and provide an unexpected chance incorporate even further into the community we serve.

I also have to mention that due to an injury SAKLAKWEL has been without a resident instructor for over three months prior to my arrival.  I cannot even begin to express how impressed I am with our Haitian executive director Jon Cyprein who seamlessly stepped into a larger leadership role.  Karate classes continued through the efforts of our Haitian Shotokan partners and our Karate students maintained their own Kenpo classes in our absence.  My first day back at the dojo I met a new student who already knew his entire curriculum taught to him exclusively by his peers.  Kids who have never taken any classes at SAKLAKWEL are showing up daily to use our blackboard to work through their algebra homework.  I have returned to a SAKLAKWEL that will continue to run with or without foreign presence (which has been our most important goal from day one).

Our next step is now more clear then ever.  Its time to literally build a new SAKLAKWEL.  It’s time to prove that the ideas and technology exist to lend a helping hand without creating a cycle of dependency.  It’s time help  through personal empowerment and say goodbye to aid models that need people to be needy.  It’s time we stop underestimating peoples ability for self governance just because they need our help at the moment. It’s time we stop pushing our dilapidated and failing system on developing countries (while private industry hides behind government and makes a tidy profit in the process).  It’s time build an infrastructure that makes our help obsolete and then to ask humbly and with gratitude to be included as peers and to continue collaborating to our mutual and equal benefit.
It’s time for SAKLAKWEL!